Tip #210: How to Handle Kinesthetic Objects 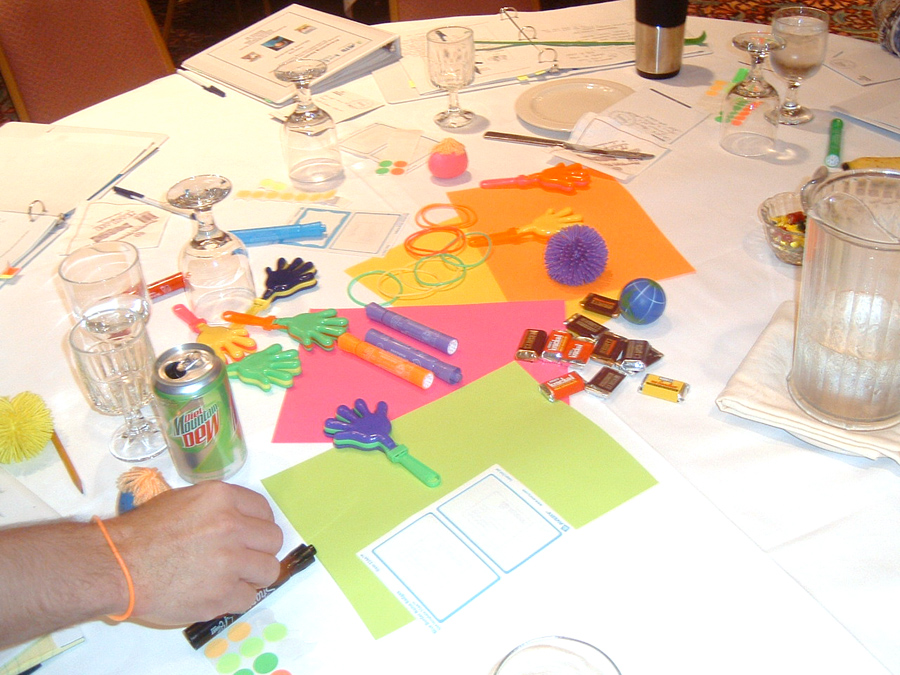 I recently conducted a train the trainer and placed a nice variety of colorful kinesthetic objects on the table. What really surprised me was that out of 6 participants, half of them literally “turned their noses up” at the objects and one participant went so far to verbally say that the objects were of no use to her. With such a small group we were all at one large table, and being a very kinesthetic learner myself, I made the decision to ignore the turned up noses and verbal objections. During day one the kinesthetic learners had made wonderful creations and were very engaged in the learning process while I miraculously watch a metamorphous take place with the other half of the learners. The “non-kinesthetic” group began to inquire and admire the creations made by the other half. On day two of the training my “non-kinesthetic” learners cautiously started fiddling with the pipe cleaners and by the end of the day, they were equally engaged in the learning process and had also made some wonderful creations.

Additionally, one of the original “non-kinesthetic” participants delivered the training at her site and incorporated some her own kinesthetic objects in her classroom. Her learners were a combination of supervisors, managers and trainers, and feedback from her training survey, included the following from a trainer:

“I loved the “things to do”(clay, play doh, markers etc.) It is not my personal thing but I did notice how much of an impact it had on some of the others in keeping there focus. I will probably steal that one from you J.

Bottom line: keep doing what you’re doing and for those that do not feel the need to utilize the kinesthetic objects, it’s always optional.

I hope this helps.

I was in that Train the Trainer class that you are referring to. I happen to be very kinesthetic (as evident by the many pipe cleaner creations) and I think that the idea to split up the different tables as you have mentioned is a good one. I think it should be mentioned of the differences in the tables in the beginning as everyone is arriving as some may be focused on other items and not realize the difference in the tables.

My personal opinion on why there were still some non-kinesthetic people at the tables with lots of stuff would be that our focus was trying to sit with different people rather than being concerned with what was on the table to play with. With that said, when it is asked of the participants to sit with new people, they may be forced to move to a table that has more “stuff” on it. So then the question becomes is it better to have people sit at a table where they may not be happy kinesthetically or is it more valuable to have them sit with different learners to gain different perspectives?

Ross, Thanks for writing. And a very good end question. Since the important thing is to have people sit with new folks, to increase their connections and possibility of learning, then- after people have seated themselves, I can remind them it is fine to remove stuff from the tables if it distracts them. Then they can make the table comfortable for themselves. Deb

I think that is a great idea. The learners will get all the positives of sitting with new people and they can still take their toys with them if they so choose. Ross

Even in the most active classes, I think it is good to not let the tables get too overgrown with items that are just there for kinesthetic stimulation. If I have nothing else going on in the class, I will have just one item (koosh ball, stuffed toy or set of pipe cleaners) per participant, and I often set them as a group in the middle front of the table so that only those who want to play can disburse them.

I always think it is most effective if kinesthetic items are tied to actual learning. In that case, you may want to keep them off to the side (but maybe in view) or even hidden until you are ready to use them. Even if they are out from the beginning, people tend to not get so put off by them, because they realize they have a purpose other than creating visual noise.

Also, keep in mind that movement itself can substitute in part for having kinesthetic objects about. So if you can plan to have learners move – change seats, go in group to flip charts, do a physical activity – having a huge number of kinesthetic objects should not be necessary.

Here’s another approach: Rather than having things out and about, even in none/some/lots configurations, how about having a central “toy chest” or “goody barrel” from which learners can choose to select something(s) to have with them if they wish. You can have it by the entrance door or sign-in sheet, and they can be instructed to pick something if they wish. I am often teaching in situations where people are at assigned tables, so the none/some/lots approach doesn’t really work.

Hope these are helpful.

I would suggest that a good way to introduce a wide variety of kinesthetic objects without overwhelming the participants would be to start with a few, then add additional items throughout the training session, at breaks, lunch, etc. That way they don’t have too much at once and will be excited by the new items when returning from breaks, therefore paying them more attention than if everything is out at the beginning.

I feel that people tend to choose where to sit by people they know or by position in the room rather than by what is on the table.

I took a train the trainer class from you in Rochester, NY a couple of years ago and have very much enjoyed your Learning Tips every since. But I’ve never written you back – I know how hugely busy you are. But I’m always impressed with your tips and the work you put into them. Thank you for all of that.

Your invite for input on this one got me. A research project! There are a lot of variables that effect a person’s comfort level and where they might choose to sit – position in the room, being able to hear, lighting, where friends sit, distance to the coffee (or the bathroom) .. . . But I think that if you ran your experiment for long enough, and got feedback from participants, you might learn some really useful things. I wonder, too, what portion of participants would prefer which table choice. What if 2/3 wanted to sit at a table with half the stuff? Maybe, if there’s room, some extra tables set up, or ready at hand ways of adjusting the amount of stuff on the table – a side table to put extra or to get more?

At the class I took, all of the tables had tons of stuff. I’m not very kinetic and hardly touched it, but I did not find it distracting either- in fact, I kinda enjoyed it just being there – it set a more relaxed, creative, and fun tone for the class.

I’ll be curious to hear how your experiment goes.