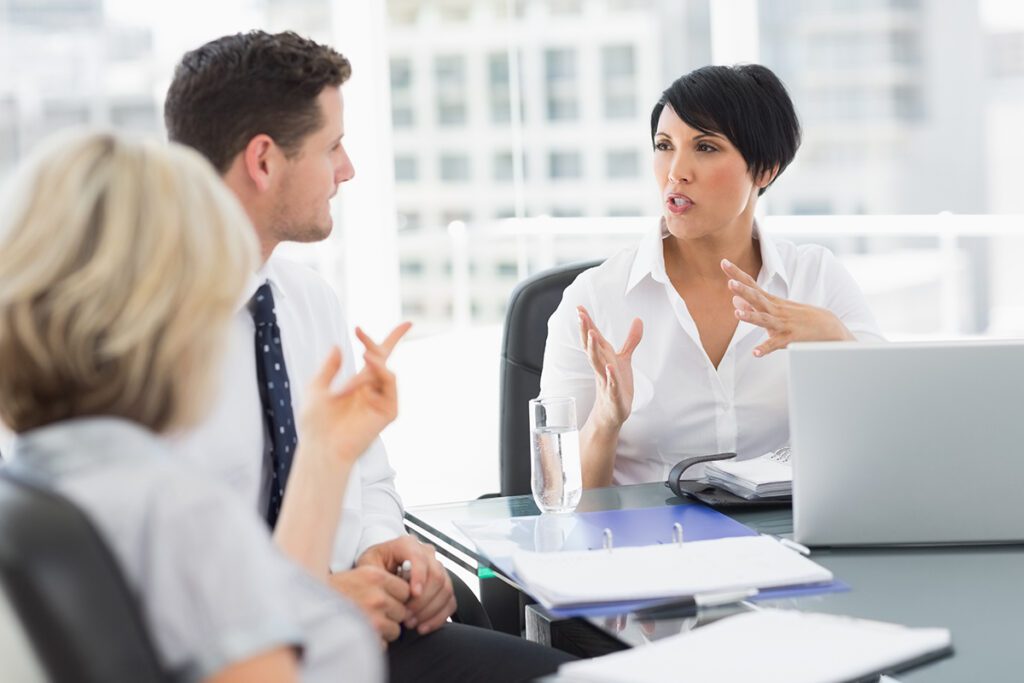 “In true dialogue, both sides are willing to change.”  Nhat Hanh

In the conflict, the individuals hold on to very different ideas, or positions. They are aware of what the other party wants because it is typically the opposite of what s/he wants.

This stalemate will not be broken until the opponents depersonalize the conflict so they can engage in dialogue to uncover the reasons, or interests, that have led to their respective positions. To achieve this understanding, the individuals will need to ask each other questions and actively listen to the answers. Once they know what each person really needs, they can collaborate to find a solution that will satisfy those needs.

There are three basic steps to constructive dialogue:

People problems are often at the root of conflict. This is frequently due to misunderstanding and/or distrust, resulting from real or perceived past interactions. It is important to set aside past history and depersonalize individual differences in order to establish the objectivity necessary for effective collaborative problem-solving. Be careful not to personalize the situation. At a minimum, you want to maintain a working relationship good enough to produce an acceptable agreement, if one is possible, given each side’s interests.

Example #1:  An employee wants permission to work a second part-time job in another company. The manager is unhappy about the request because he has had past dealings with that company that were very unpleasant.

The manager will need to set aside his negative feelings about the other company so that he can objectively consider the consequences of agreeing to the employee’s request.

Example #2:  The company budget has only enough to fund only one department’s request. Two managers are competing to obtain that funding. These two managers have continually been at odds. One has accused the other of luring away her top two employees. The other has complained that employees in the other department have not been responsive to his employees’ needs. In short, they have a very negative past history.

At least one of the managers will need to set aside their past history to depersonalize the situation so that s/he can initiate a calm and objective conversation about their respective needs.

The object is to satisfy people’s underlying interests. This includes their underlying motivations, needs and concerns, fears and aspirations. The only way to identify those interests is by asking questions and really listening to the answers. Each side has multiple interests, and the most powerful of them are basic human needs. If people focus on only one position, it may obscure what they really want and limit their ability to invent options for mutual gain.

Example #1: Rather than making assumptions, the manager asks the employee why she wants to take on the second part-time job at the other company. The employee explains that her interest in the job is purely financial. She assures the manager that she enjoys her current full-time job, but recent personal matters have put a drain on her resources.

The manager wants to be supportive. She is a valued employee who has been handling additional temporary assignments with great competence. His interest is having her continue to perform at that level. He is afraid that working both jobs will tire her and her performance will suffer as a result.

Example #2:  The manager who is initiating the conversation explains her department’s funding needs, which is a new printer/scanner/fax machine. When she asks the other manager to reciprocate and tell her what his department needs, she learns that he needs several new computer terminals.  She follows up by asking why he needs the new terminals. He responds that his department is taking on several interns for the semester. His interest is in seeing that the interns have access to computers to do their work. She follows up by asking how much time the interns will need to spend on the computers. He replies that they will have to submit weekly reports as well as summaries and conclusions for use by the permanent staff.

When he asks her what is wrong with her department’s current printer, she explains that when her staff needs to use a color printer when they create training materials. The existing printer is only black and white. Her interest is that her staff have a color printer at their disposal when they need one.

It is important to separate the process of creating possible options for agreement from the process of deciding among those options. To invent creative options, it is necessary to broaden the options on the table rather than to look for a single answer, and to search for mutual gains. Look for shared interests and different interests to dovetail.

Example #1:  The manager knows that the employee’s reason for wanting the second job are financial. The manager also knows that he wants her performance to continue at its current level. He can now start to identify other options that will benefit her financially.

These options include: providing incentive pay; upgrading her position so her salary increases; creating a higher-level position that formalizes the additional duties she is now performing; etc. Any of these options could satisfy both the employee’s and the manager’s interests. He will meet with human resources to determine which option will be most feasible and then assure the employee that her financial needs will be met without a need for her to take the second job.

Example #2:  Now that both managers understand each other’s needs, they can work together to attempt to find a solution that will satisfy them both. They brainstorm possible options: each department takes half of the available money and then finds another way to make up the difference; or each manager considers less expensive equipment.

Perhaps his department could coordinate with hers to provide access to their color printer, while her department loans him several computers that are currently available because a hiring freeze has left her with vacant positions. By the time she is able to fill her positions, the interns will be gone. This option appeals to both of them, because it will free up the funds to address some company needs that impact both departments.